YOU DON'T OWN ME

a story about women who can kick ass on screen

I’ve always had a fascination for strong powerful women. I think I understood quite early that power was a given to men with no questions asked and that they would never have to fight for it. That’s why male characters have always seemed lazy to me.

Females on the other hand were always outnumbered in the teams, always in the back and yet had so much more charisma and aura – I guess it’s because they were created to arouse straight cis males. So of course I wanted to be them!

Obviously, it all started with tv shows, first came Xena, and then Buffy, Charmed, Relic Hunter, Alias, … On tv women were allowed to have power, to take the lead, to fight, to change the odds.

Before the 00s, women in movies weren’t allowed their part of the action, except if they were in a horror film or a Luc Besson movie. It took a while for them to become the leads of action movies, and another while for those movies to be considered good.

So here’s a list of action women, from the early 00s to now, who shaped my cinematic universe.

“Yes Debra, you can be fierce AND funny!” 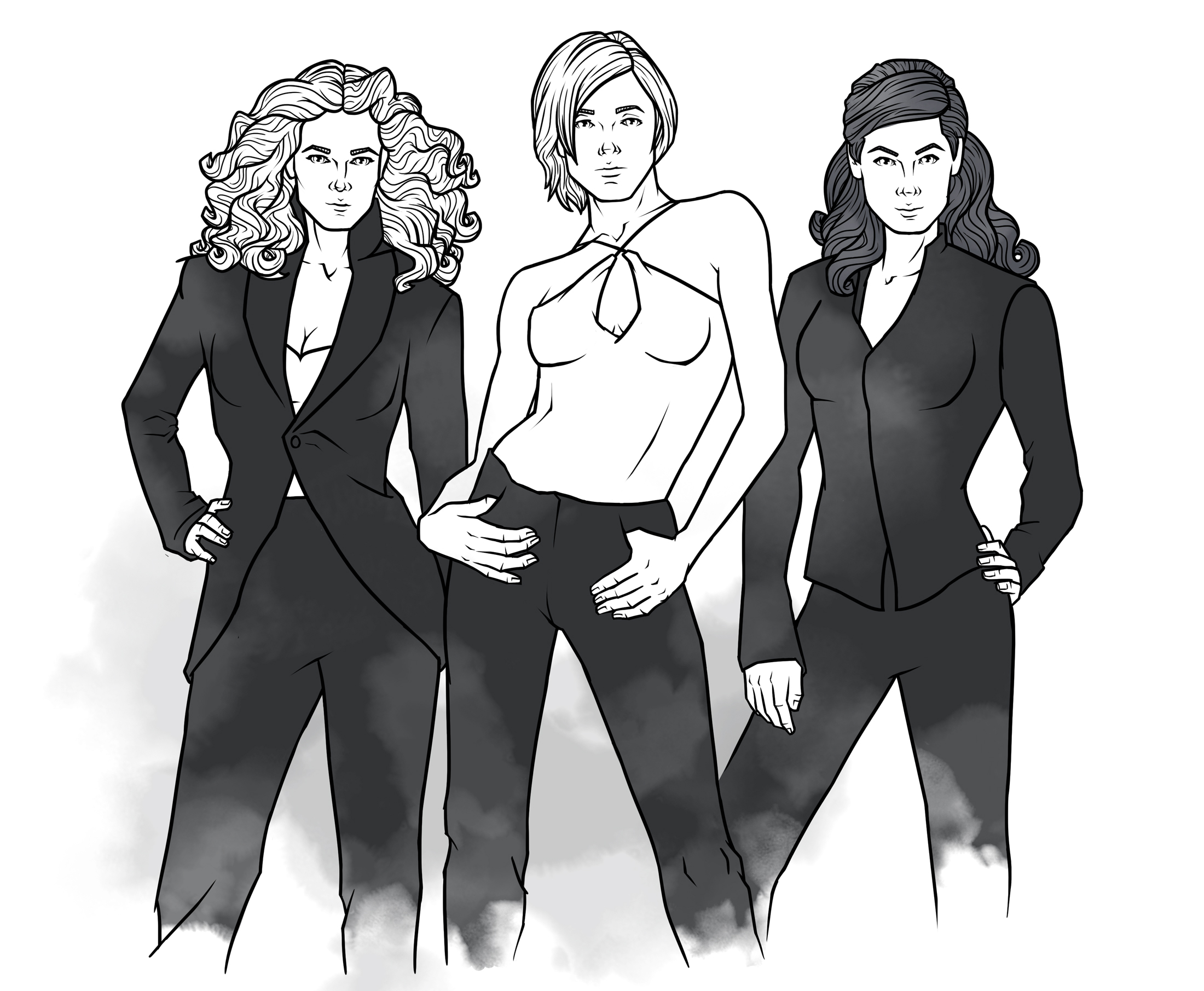 The Charlie’s Angels franchise may not be considered a masterpiece in its classical sense, yet to me it is. To my knowledge it is the first action movie with female leads only – and bitch please we’re talking about Barrymore, Liu and Diaz!

Yes, it is cliché, the photography might seem garish, the action scenes are far from being realistic, but if you watch those movies and can’t figure out their ironic tone, then I’m really sorry for you, your life must really be lacking flavour.
Those two movies punched the action comedy genre in the tits and gave it a whole new dimension! Of course it’s parodic, and that’s what makes them unique and lovable. I truly have the most fun watching and rewatching them all over again, because nonsense gives me life.

Action comedy took a whole new sense in 2015 with Spy – and Kingsman sure, but there ain’t no female empowerment there my good sir.

So Spy was blamed for humiliating women, except what’s good in it is that EVERYONE is a dumb ass (just like real life, Susan), so everyone: take a slice of the shame pie.

Spy is even more absurd than everything that was made before it and it’s so refreshing.

“She'll kick your ass with her Louboutins” 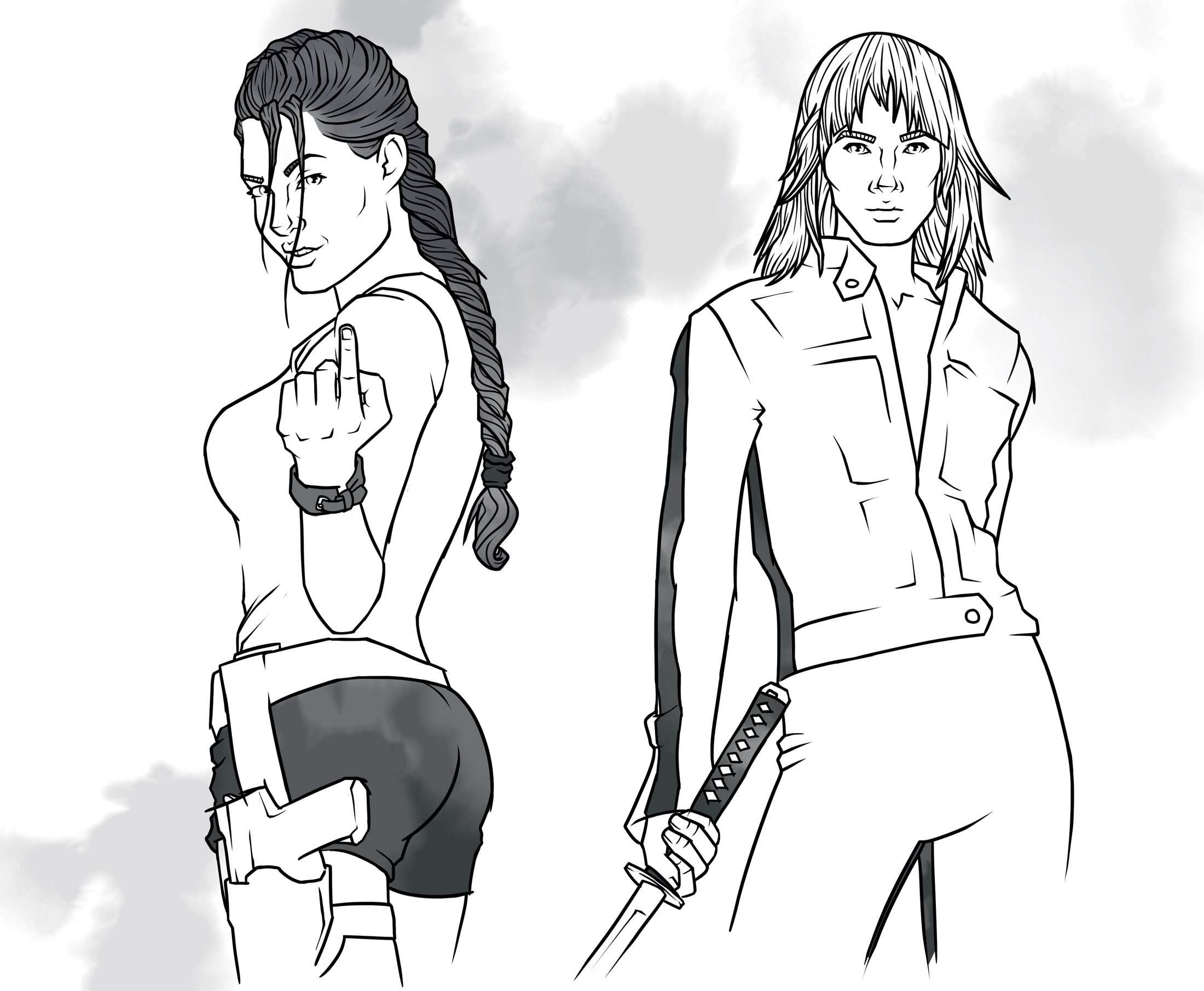 The first solo action woman lead of the list had to be Angelina Jolie in Tomb Raider.

The movie did exchange brain for guns, and turned the smart archeologist into a badass women who shoots first and thinks afterwards, in short she does it like a dude. But hey… it’s still a fun film to watch.

Kill Bill, on the other hand, kind of shook things up. Tarantino turned the action trade away from it’s dark grey tones and straight into a bright yellow fest. Kill Bill won every movie lover’s heart with its gorgeous and precise photography, and with a whole lotta women in charge.

My unpopular opinion is that Uma Thurman has the least interesting role in the movie and that all the other women in it help carry the character through more than they should, which is an achievement in itself.

From Angelina Jolie, to Uma Thurman, beauty is power. Here come’s Charlize Theron in a movie about as violent as it is beautiful. Atomic Blonde’s imagery is so perfect, I could watch 2 hours of footage of Theron walking in slow-motion in this grey-blue-ish Berlin, so exhilarating.

Atomic Blonde is one of those movies that leave you with the feeling that you can do anything, the world is yours, now take a bite. And those fights!
Here, there is no Marvel-women fight were it’s about « let me slide you between my legs and suffocate you ». The hits are hard, vicious and unforgiving.
This is what badass looks like, and it carries a Dior bag around. I’m LIVING! 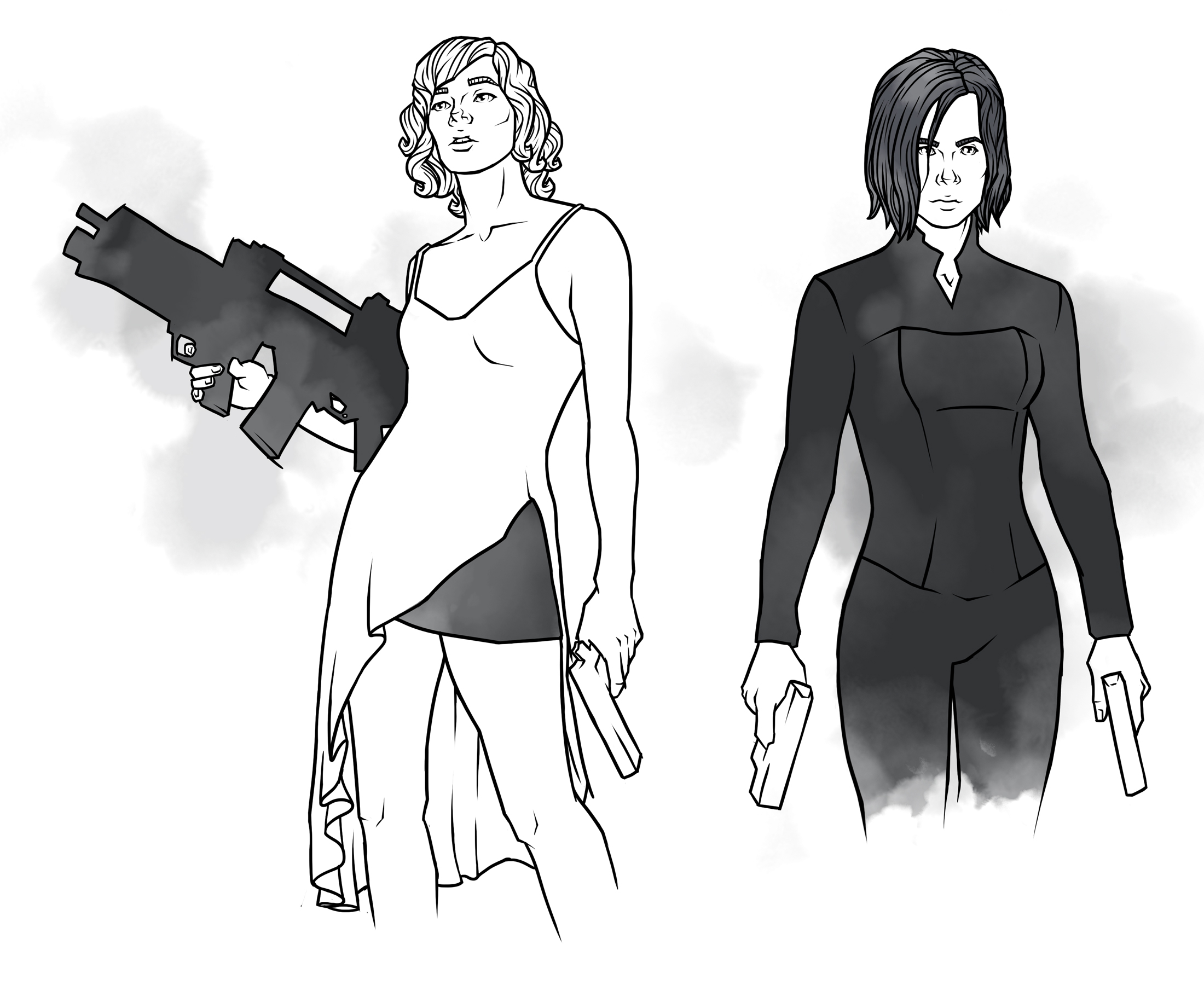 Welcome to a fantastic world where creatures and demons are out to get you. Being a huge fan of Buffy and Charmed I transitioned into horror movie fandom quite early (hello 10 years old me!).

So of course I imprinted on Alice from Resident Evil and Selene from Underworld. You should have seen me running around the woods in my long black coat, jumping from rocks, living my sweet vampire fantasy.
I am still a fan of those franchises (except that last Resident Evil because bitch please stop pissing on your audience), because you do not get to expect anything realistic from them, you do not want that movie to make sense.
Watching those movies, you want the excitement of the impossible, the thrill of a video-game-like movie that pushes the boundaries of absurd zero-gravity moves. Honey, this is exactly what you get.

Sucker Punch takes it one – or ten – step(s) further. I can’t even begin to express how much I love that movie. So many layers, so creative, so impossible and poetic. It’s a dream. The perfect cross between a musical, a manga, a video game and an action movie.

Every element is there, every reference is at its place.

It’s twisted, it’s violent, it’s creatively smart, and most of all it’s so far from being one-dimensional. BRILLIANT!

“I said NO CAPES” 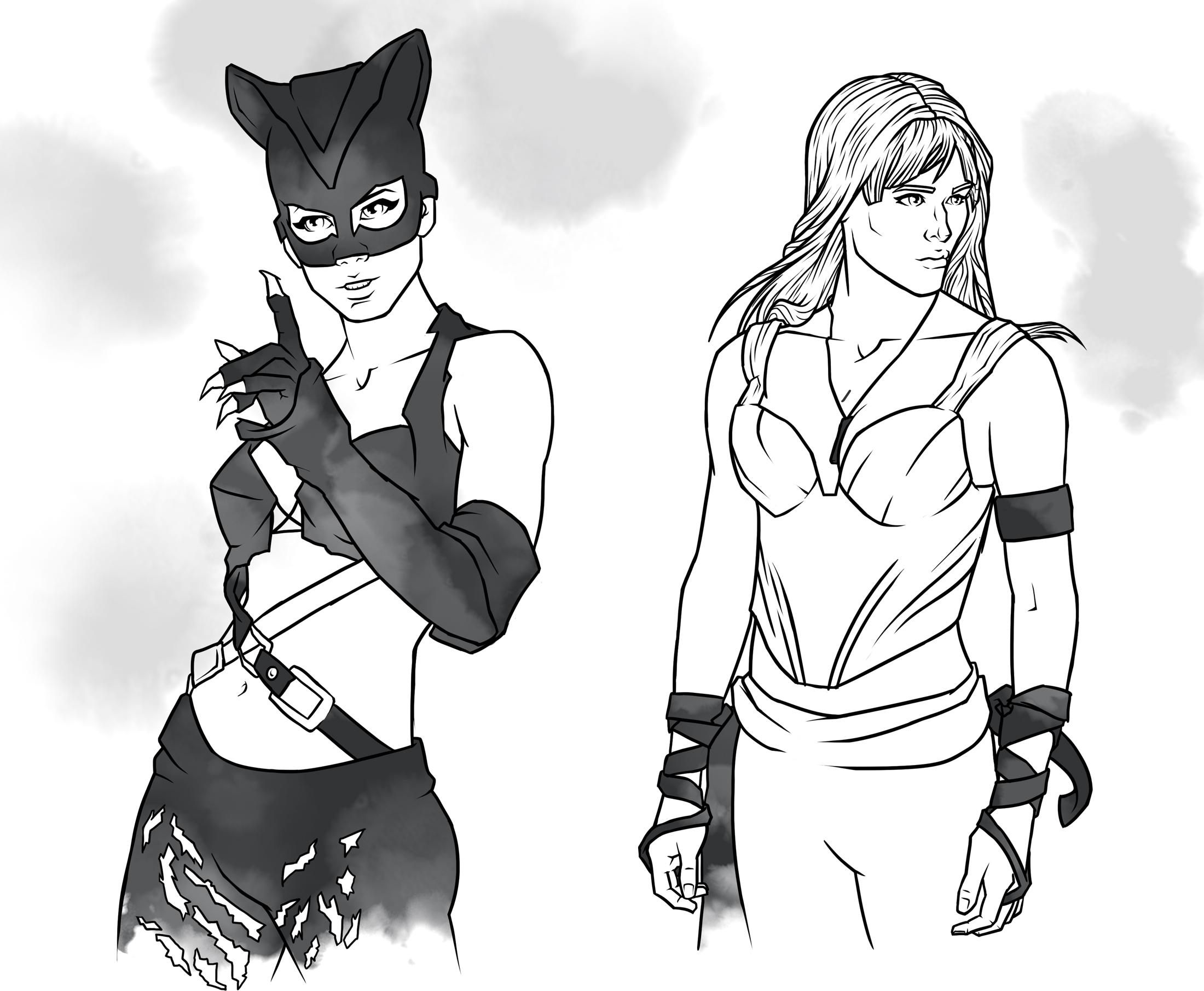 Here we are now, guilty pleasures all the way.

In a world where the superhero genre was exploding, Warner Bros decided to revive Catwoman in an adaptation that has nothing to do with the original character and storyline.
Yet, she was the first female super with her own feature movie. A movie so bad that nothing can save it, but yet resonated so deep with my queer little heart. In this movie Catwoman is so overly feminine and sexual that she’s almost the first drag queen I fell in love with.
One year later Marvel gave us Elektra, once again the lead is all overly sensual, in her satin and leather outfit, but I can relate: she’s over controlling, precise and efficient (which are a curse and a blessing trust me). And more than Elektra herself, I was a so in love with Typhoid, the deadly, seductive assassin with her long blue fake nails.
Super heroines are often turned into a fantasy, which happens to be damaging to a movie. Good films about objects do exist, they are called Toy Story, but there, toys have actual personalities. Being sensual isn’t a personality.

Finally, 12 years later, another DC heroine gets to the front of the stage… And this time it’s a woman behind the camera.

In a crowd of praises and hallelujahs, let’s take a step back and watch – really watch – Wonder Woman.
Gal Gadot is stunning, a good actress and embodies the role to perfection. FACT.

That’s about it though… The scenario writes itself, there is nothing really demanding or surprising about it, and the character grasps her full abilities thanks to the power of love… What a fucking cliché storyline for a wannabe feminist movie.

Let’s be real, I will never ask an action movie to revolutionise the genre completely, there has been too much done there. But if you want to shake things up, maybe start by creating a character that doesn’t need to have feeling for a man (or anyone else for that matter, poke Frozen) to come into her own.
Yet the movie is enjoyable but I’m still waiting for a true super heroine that will have depth, be fierce, independent and not a sex toy. Who’s game?

And suddenly, I was heard.
Fast forward to one year later, and thankfully, the times they are a changing!

I did not address Margot Robbie as Harley Quinn before because even though she carried the garbage pile that was Suicide Squad, she was not featured as the lead of that movie.

Consider that mistake fixed. Birds of Prey is showing everyone how you do it. Not only does this movie bring back the fantabulous and oh-so-lovable Harley Quinn but it also introduces incredible bad-ass women, with enough depth to be relatable and the right amount of crazy to be entertaining.

Cherry on the cake? This first ever all-female action movie (we are talking lead, director, writer, ost, costume design, …) is pushing the buttons of every macho man out there. Making it as delightful as it is cringy and infuriating to see them explain how to MeToo movement is destroying the movie industry. Boohoo poor men with fragile egos…

Hopefully the first of many, Birds of Prey tells the tale of female emancipation in a man’s man’s world, giving us exactly what we had been waiting for since, well, EVER!